What Is the History of Water Guns? 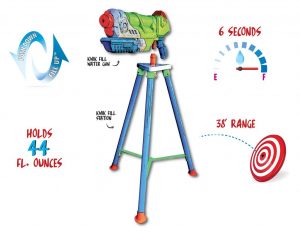 Water guns are a summertime staple that brings many hours of fun to children and adults of all ages. You’ve likely fired some liquid ammo yourself a time or two, but have you ever thought about when and how water guns first started?

You might be surprised to learn that water guns have been around for quite some time — they were even mentioned during the American Civil War. The history of water guns is extensive and filled with interesting details, so let’s try a quick blast into the past and learn more about these warm-weather toys.

Based on records and quotes from Abraham Lincoln regarding “a squirt gun,” it is believed that these toy guns were around before the American Civil War. The original water guns were not at all like the plastic ones you see in backyards all across America today — they were made out of cast-iron, tubing and a squeeze bulb.

Of course, with their simple squeeze bulb, these guns were not able to fire water very far. Over the years, these cast-iron guns changed to the more familiar plastic style, but they still were not capable of firing long distances.

The Evolution of the Squirt Water Gun Into the Super Soaker

While the squirt water guns were fun, it wasn’t until the late 1980s that they were replaced by something even more powerful and fun — the Super Soaker.

The Super Soaker was designed and developed by Lonnie Johnson, a mechanical and nuclear engineer who was passionate about inventing. Interestingly enough, however, it was discovered by accident when he was in the process of creating a heat pump that used water. When he attached a nozzle to the faucet in his bathroom, he discovered how powerful it made the stream of water. Realizing that this kind of system would make for a great water gun, he began tinkering away on a new project.

The Future of Water Guns

Building on the interesting and innovative history of water guns, the patented Kwik Fill Water Gun System is the latest installment in a long line of models. What makes this water gun revolutionary is its pressurized filling station. Instead of wasting time and water having to fill up your water gun, you can just hook the station to your hose and push down to fill your water gun in about six seconds.

Now, you’ll be able to enjoy even more hours of family fun activities!

To prepare for some fun in the sun, check out our online retailers and arm yourself with the new Kwik Fill Water Gun System.