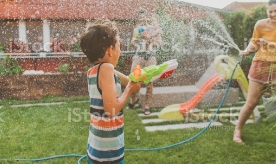 Warm weather is here again, and you know what that means, right? Water gun wars! Now is your time to start amassing an army of your closest family members and friends and transforming your yard into a battlefield. This classic summer game will have everyone engaging in some friendly — yet no doubt fierce — competition to see who comes out as the victor.

To add some structure and strategy on your battlefield, we put together a fun water gun fight guide. Collect your water weapons and prepare for war!

One of the most simple and fun water gun games to try with your friends and family is a free-for-all. This game works especially well if you have young children joining the ranks and entering the battlefield for the first time. You won’t need to worry about explaining rules, and they can just focus on having fun and soaking anyone in sight with their water guns.

A water gun tag war is just like a regular game of tag — but more fun. You start this game off by making sure everyone’s water guns are fully loaded, then everyone yells “Not it.” Whoever is the last one to yell “Not it” is the one who will be “it” to start.

Now, you better get running! The player who is “it” is the only one who can chase the other players down and shoot at them with their water gun. When they hit someone, that “victim” becomes the new “it.”

Freeze tag is similar to regular tag, except this time, you’ll need only one water gun. You’ll start off by figuring out who is “it.” Unlike regular tag, however, the victims have to freeze in place when they’ve been shot.

Victims can become unfrozen if you crawl in between their spread-out legs. Don’t let “it” freeze everyone up, or the battle will be lost!

If you like battling in teams, this game is for you. Arm all the players, then split your group into equal teams. Decide on a time limit, such as 10 minutes, then prepare for battle!

The goal of this game is to soak the other group as much as you can in the designated amount of time. When the timer is up, each player receives points on how wet they got during the battle. For example, you can assign one point to players who got a few splashes of water and 10 points to players who got fully soaked. After you add up the players’ points, the side with the lowest score will be the winner.

A target water gun round is great for players seeking a more precise and challenging game. Every player must wear an Alka-Seltzer strung onto a string like a necklace. The Alka-Seltzer on other players is the target, and the goal is to make it dissolve with your steady water gun aim.

As you plan which battles to engage in, you’ll need a water gun that will fight for you. Instead of wasting minutes waiting for traditional water guns to fill up — putting you in a vulnerable position during the game — go for a higher quality gun.

The revolutionary Kwik Fill Water Gun System uses a pressurized filling station that can fill your entire 44-ounce water gun in just six seconds. Order your system from these online retailers and get ready for a summer full of family fun!